"We won’t sell a motorcycle that we personally would not ride - period."

Looking to purchase a quality Motorcycle?

We Deal in the Cleanest Harley Davidson Motorcycles and Coolest Choppers I can Find. I spend a great deal of time and money on advertising looking for those special Motorcycles, if you want a Great Deal on the Cleanest Motorcycle I can find by searching hundreds of units a week from the biggest auctions nationwide, dealer trades and outright purchases I make every week, We use Advanced Technology to allow me to positively determine whether the Motorcycle I am looking at has ever been painted or wrecked, if not I continue with a check list I have developed over the last 30 plus years, when my inspection is done the Motorcycles I choose will be Cleaner and Nicer than any like it, Simply Put I won’t sell a Motorcycle that I personally would not Ride. Please view some of the inventory we currently have for sale. 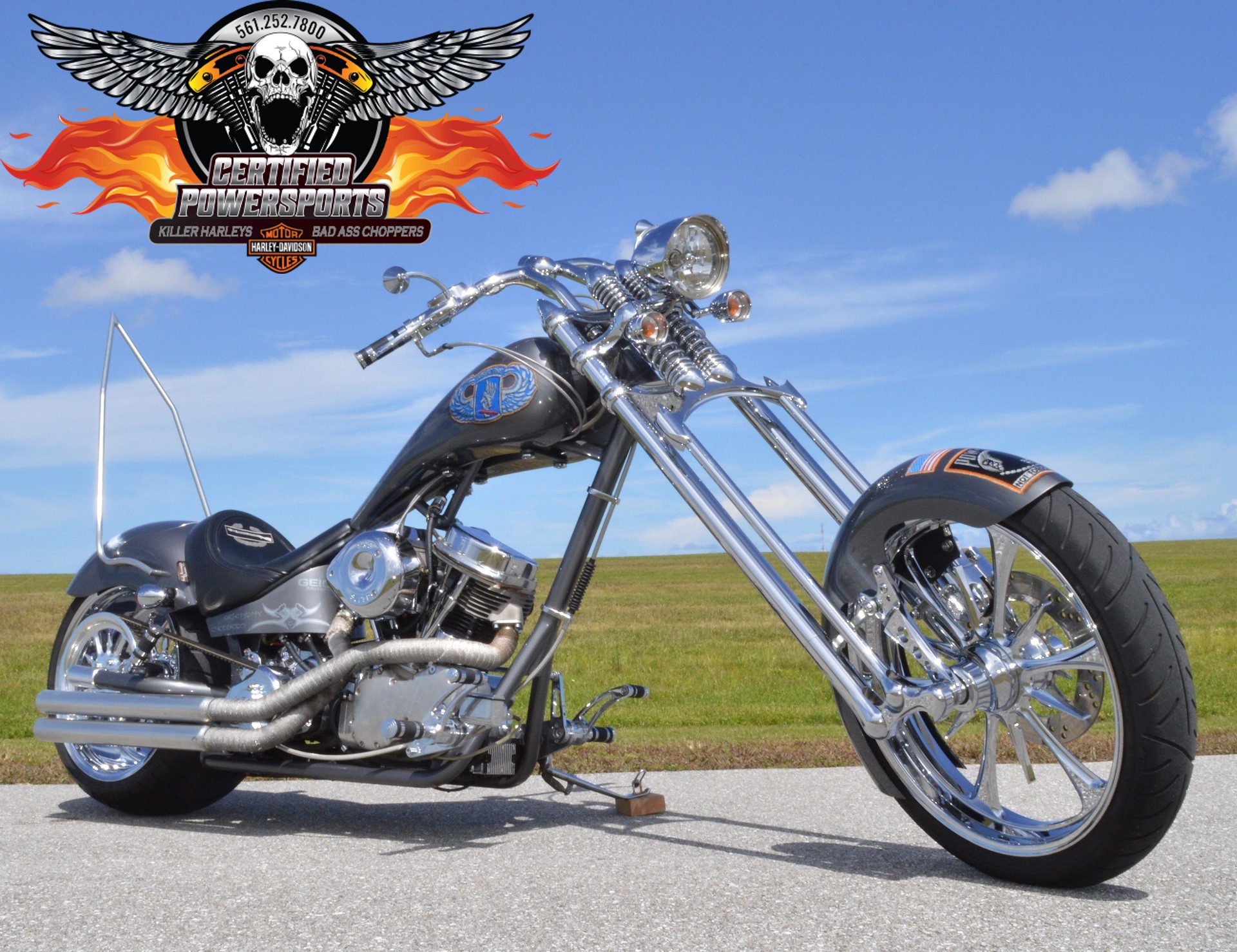 2007 LOGIC VOODOO 173rd AIRBORNE SPRINGER PANHEAD SOFTAIL CHOPPER, Very Special Chopper with Direct ties to Big & Rich Country Music Stars and the song they wrote about Viet-Nam War Hero Master Sergeant Niles Harris 173rd Airborne Division. Big & Rich Commissioned this custom built Chopper for Niles with Big Rick Hoffman Owner of Logic Motor Company. This Chopper was on display at the Grand Casino in Deadwood South Dakota for 14 Years. This custom chopper given as a gift to Niles by Big & Rich. This piece of American History covers United States Military, Country Music, Custom Choppers and Patriotism all in one Like New Collectible Motorcycle with the coolest stories and people in the USA. Only 80 miles, Absolutely Mint Condition. Very Custom Paint Job by Beckett Body Works; Gunmetal Grey Pearl Base With 173rd Airborne Graphics and Cowboy Hat and Top Hat from Big and Rich on fuel tank, Master Parachutist Patch and Crying Angels Graphics on rear fender, American Flag, POW-MIA patch and Viet-Nam map Graphics on Front Fender, Celebrity Choppers Logo on Oil Tank, with Matching Gunmetal Grey Pearl Frame. V-Twin Manufacturing Built this Panhead Motor with the Very Best Components: Cases, flywheels and connecting rods are S&S, Cylinders and pistons are V-Twin Manufacturing, Heads are American made STD Performance Heads, V-Twin Manufacturing/Sifton .412 Cam, Sifton oil pump, S&S Super E Carb, V-Twin Cam Cover. Accessories Unlimited 6 Speed RSD Transmission, BDL 2 inch Open Primary with Enclosed Kustomwerks Chrome Cover, Logic Motorcycles Custom Made Dual Exhaust, S&S Chrome Air Intake w/ Screamin Eagle Air filter, Harley Davidson Ignition. RC Component Chrome Aluminum Billet Wheels, FAT 300mm Rear Tire, Fat 120/70-21 inch Front Tire, both Avon Venom Tires are in Excellent Condition, RC Component Chrome Matching Disk Brake Rotors, Chrome American Suspension Springer Front End, Chrome Kustomwerks Billet Headlight with LED Light, Kustomwerks Fatty Chrome Handlebars, Jaybrake Chrome Hand Levers, Chrome Hand Grips With 173rd Airborne Medallion End Caps, Chrome Jaybrake Hand Controls, Chrome Jaybrake Switch housings, SS Diamondback Stainless Steel Brake, Clutch & Throttle Cables, Chrome Jaybrake Forward Foot Controls, Jaybrake Foot pegs, Chrome Jaybrake Brake & Shift Leavers, Chrome American Suspension Dual Piston Front Brake, Chrome HHI Four Piston Rear Brake, Chrome Inner & Outer Primary’s, Oil Tank, 5 Gallon fuel tank, LED Fuel Gauge Lights, Chrome Bullet Turn Signal all with LED Lights, 25 inch Seat Height With Custom Danny Grey Leather Seat with Combat Infantry Badge Sewn on the seat, low center of gravity with Progressive Softail Suspension. Just went through Service for Safety Check.. Carb rebuild, fuel filter, Fresh Oil and Filter, New Battery and tender tail. Only 80 miles, This Chopper in Absolutely Mint Condition. Florida Title in Hand. $99,995.00 Please Call Jim to schedule an appointment 561-252-7800 Niles Harris was the Inspiration for Big & Richs Country Hit {The 8th of November} Big & Rich Commissioned this custom built Chopper for Niles with Big Rick Hoffman Owner of Logic Motor Company. This Chopper was on display at the Grand Casino in Deadwood South Dakota for 14 Years. The custom chopper given as a gift to Niles by Big & Rich. 173rd Airborne Patch is painted on both sides of the tank. Big Kenny and John handpicked every painted design on the bike to pay tribute to the November 8th battle. The 8th of November Documentary 1hr video tells the story of the loss of 48 American Soldiers & many more that were wounded, including Niles. Country duo Big & Rich (Kenny Alphin and John Rich) Their smash single (The 8th of November) is based on a story so significant that it could not be told in a standard 3-1/2-minute song and video. So it has been made into an hour-long documentary. Niles Harris, a Vietnam veteran and Purple Heart recipient who survived a battle that took place on Hill 65 in War Zone D on Nov. 8, 1965. Forty-eight of Harris comrades in the Armys 173rd Airborne were killed and hundreds wounded in a battle that found them outnumbered 30 to 1. In 1965, Big Kenny was a 1-year-old and John Rich was not yet born, but a chance meeting with Harris in a Deadwood, S.D., bar created what has become a lasting friendship. In 2002 before they even had a record deal, Alphin and Rich played at a saloon in Deadwood where Harris tended bar. Moved by Harris’ tale of life as a 19-year-old Army private shot down in jungle fire, the duo wrote (The 8th of November.) (The difference between writing this song and writing other songs is that normally Kenny and I would sit right down, have a couple of beers and write a song, But in this case, it was so important to us that we just wanted to make sure it was right,, It’s the pinnacle of all we’ve written so far.) In 2005, the duo asked Harris if he would be interested in revisiting Vietnam for the first time since his last tour. With a documentary crew of Americans and Vietnamese in tow, the group traveled 34 hours to the exact site of the Hill 65 battle. The boots Harris was wearing the day of the battle were buried at that site in a crater made by a B-52 bomb. Niles Harris story sheds light on the realities of one individual in the center of a war, the duo said about the inspiration for their documentary. (There are thousands more out there just like his and we wish to honor all of our military personnel who have represented our country with courage and bravery.) * Chopper Running * https://youtu.be/gw9IT7k7Uls * Big & Rich - 8th Of November Song (Video) * https://youtu.be/h_OyFoxp_uo * Big & Rich,,, Niles Harris documentary 1hr * https://youtu.be/gw_UJwwI_Is